The MIRA system consists of several separate transmitter and receiver antennas combined into one single antenna array unit. In operation, the antenna array is tracked and positioned by a robotic (self-tracking) total station or a RTK GPS for precise positioning. This give several parallel profiles exactly positioned at the same time, resulting in a seamless 3D picture of the subsurface, with a high-resolution of subsurface features both in horizontal and vertical direction.

The system and its array technique uses a number of transmitter and receivers simultaneously to measure several parallel profiles in one sweep and by doing so, the survey becomes detailed, accurate and extremely cost-effective.Using the recommended settings gives a stable 32-bit output even at highway speeds, producing exceptional data quality. The 6.5 cm channel spacing, allows for the collection of precise, high resolution data down to a depth of 5 m (depth penetration varies depending on local conditions). The system can collect up to 132 data channels simultaneously since it allows any combination of the individual receiver and transmitter antennas used in the array to be paired for measurements during data collection.

The powerful MALÅ HDR technology provides the user with unmatched versatility and performance. Integration, ease of use and flexible configurations are just a few of the features in the MALÅ MiIRA HDR. The MALÅ MIRA has been redesigned to take full advantage of the MALÅ HDR technology, giving you the best possible GPR data quality, resolution and depth range. The MALÅ HDR technology produces data with significantly lower noise levels, compared to traditional GPR systems. A lower noise floor gives a wider bandwidth when compared to conventional time-interleaved systems. This removes more of the background interference, giving sharper data with higher contrast, and the ability to see deeper than non-HDR systems. ​You can read a detailed explanation of the HDR technology here.

The MALÅ GPR MIRA system is designed using multiple antennas configured in an Array. Up to 30 antennas can be used simultaneously to gather data in real time. It was designed to retain survey speed regardless of number of antennas used. The power within this product lies in its ability to quickly and easily gather full 3D data in broad paths, so called “swots”. Results are processed in 3D, displayed and interpreted through a dedicated software package and then exported into suitable GIS or CAD data formats.

Software: With the new MIRAsoft HDR acquisition software, you will experience a modern and easy-to-use interface with integrated navigation aids, that speed up your surveys even further. It lets you track the performance and data collection in detail, helps to maintain the correct speed and course, shows real-time slice views and real-time GPS positioning.
MIRAsoft HDR can be used for collecting new multichannel GPR data and also to view previous projects; it exports to several formats for simple integration with other software packages. Post-processing and interpretation of data are done in other 3D GPR software such as rSlicer and  GPR-SLICE. 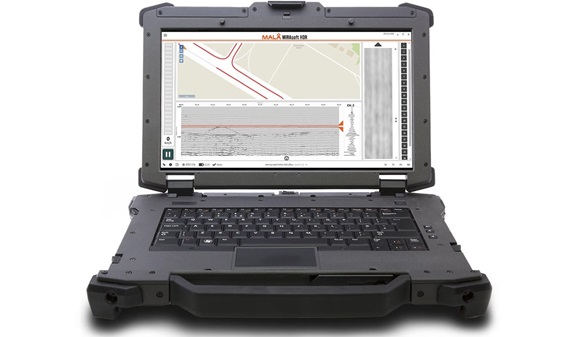 MALÅ GPR Carrying Solutions: Like many MALÅ GPR products, there are a variety of carrier solutions available to suit different applications. The MIRA HDR is designed to be used in a regular lightweight trailer for road surveys or front-mounted for precision work.
The strong but lightweight materials used, and compact design of the antenna array box also allows it be hand pushed with ease. Contact us to see what the most suitable solution is to fit your region and application.

As opposed to normal multi-channel systems, the MIRA system enables fast and easy, true, 3D data acquisition. From a user perspective this means that large areas can be mapped without loss of information and that the method is suitable for almost any kind of, shallow, subsurface investigation, i.e. targets with arbitrary shape, layers and linear objects are mapped equally well.

Applications: The MIRA system would typically be used for high-level service locating, road mapping and archaeological applications. Not only are the utilities located efficiently and with maximum detection rate, accurate their location and depth is also recorded for future reference.

The system is suited for industry leading private organisations operating on the highest level and who are industry leading within their field. Some training is required and dedicated personnel for its operation is recommended.